I predict that the above player will not be as big of a bust as Darko Milicic. Because he was taken 5th, not 2nd.

Career wise, I expect nothing more than a Shawn Bradley.
posted by ebrian @ 4:16:00 pm 0 comments

Do not underestimate Kemba

I know I don't post here too often anymore but I finally have something important to say. The Raptors have the 5th pick in the 2011 NBA Draft, and they should select Kemba Walker.

Here is Kemba showing off his breakdancing skills: 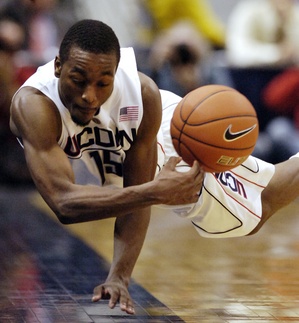 No offense to the rest of the Connecticut team, but Kemba pretty much single-handedly won the NCAA Championship this year.

When Kemba shoots, his opponents cower in fear:

He's been labeled as a shoot-first point guard, but in highschool people thought he couldn't do anything but pass. His hard work ethic paved the way for him to become his team's leading scorer, but that doesn't mean he can't do other things when asked to.

Do. Not. Underestimate. Kemba:

People think Kemba is too short, but he's the same height as Chris Paul and Rajon Rondo, two superior NBA point guards. They worry he can't defend, but Kemba has one of the best PPR (point-guard point rating) of all the draftees. He averages 1 steal per 18 minutes in college.

Look at that face. He's determined.

Kemba is a team player:

Look, they're practically trying to tear his clothes off!

Bryan Colangelo, you never listen to me but just do it once. Kemba Walker will be the best player from this draft. It was a gift to have fallen to 5th overall. Do the right thing.
posted by ebrian @ 4:11:00 pm 0 comments